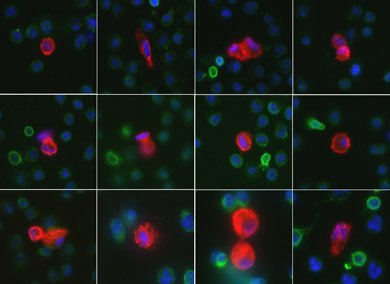 Collection of circulating endothelial cells (CECs) isolated from a blood sample of a patient while experiencing a heart attack. When the sample no longer was needed for patient care, it was used in the CECs studies.

Although genomics has advanced scientific understanding about the underpinnings of disease, much of that progress has occurred in cancer because tissue-specific molecular characteristics, such as somatic mutations, epigenomics and regulatory elements, can be analyzed in tumor tissue obtained through biopsy or surgical resection.

In patients with coronary artery disease, however, scientists do not have access to the diseased arterial tissue except via the newfound opportunity for isolating and fully characterizing circulating endothelial cells (CECs).

Almost a decade ago, researchers identified significant levels of CECs in the blood of individuals who were at high risk for, or already had, an acute myocardial infarction (MI) or ischemic stroke. Subsequently several additional studies validated CECs as a potential biomarker for vascular injury. However, the cells’ molecular characteristics or ultrastructure have yet to be defined. These mature CECs may harbor key genetic and ultrastructural features that predispose patients to acute vascular injury events.

To better understand the mechanisms leading to acute arterial plaque rupture or erosion in patients with myocardial infarction and stroke, Scripps Translational Science Institute (STSI) researchers are sequencing the DNA of both CECs and germ-line cells. RNA sequencing, mRNA expression profiles and a determination of the ultrastructural characteristics of CECs also are part of the research.

The results may lay the groundwork for a point-of-care assay that could be used in prospective clinical trials to assess the validity of CECs as a prognostic biomarker.

In addition to establishing the optimal method for isolating CECs that could be used in clinical care, STSI has provided the first research evidence that CECs derived from MI patients are morphologically distinct from CECs of healthy controls. With their assay, which is highly specific for CECs, they have validated that these cells are highly diagnostic in acute MI and provided the first research evidence that healthy individuals have persistently low CEC levels over time.

STSI Director Eric J. Topol, M.D., who assembled the transdisciplinary team, hopes that the findings also will generate a multi-scale atlas of mature CECs that can be applied on a population-wide basis to tailor risk and therapy based on each individual’s unique cellular pathobiology.

In addition to providing a molecular fingerprint to identify high risk individuals, CECs may improve scientific understanding about the mechanisms of acute arterial plaque rupture. Thus, CECs, which are shed when a plaque ruptures, may serve as a fluid-phase biopsy, a counterpart to the tumor biopsies that have supplied the tissue essential to cancer genetics research. In future studies, STSI researchers will search for the DNA changes that modulate the variable responses to clopidogrel that characterize the patient population.