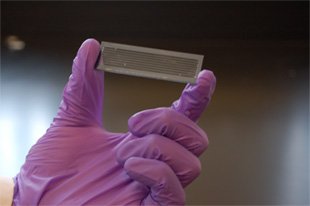 The DNA fragments bound to the inside surfaces of the flow-cell will be synthesized and imaged with the advanced sequencing equipment in STSI’s labs. Because a single flow-cell contains eight lanes, eight separate samples can be sequenced simultaneously. A flow-cell can generate up to 150 billion base pairs, providing scientists with 50x coverage of the human genome.

To accelerate the pace of research needed to provide the cancer genomics knowledge needed for the accurate diagnosis of oncogenic cells and tissues, the Scripps Translational Science Institute (STSI) established the Human Tumor Sequencing (HUTS) project.

Scientific knowledge about oncogenic mutations is incomplete because cancer is so genetically complex. Identical DNA mutations do not characterize the tumors of people who have the same cancer. Research thus far indicates that even within a single patient’s tumor, the malignant cells genetically differ, and relatively few of these mutations drive the tumor’s growth.

Collaborators at STSI, The Scripps Research Institute (TSRI) and Scripps Clinic are consistently sampling each tumor under investigation in the HUTS project so that they can define the heterogeneity of mutations within each mass. For example, in their investigation of a stage IIIC colon adenocarcinoma in a 40-year-old male patient, STSI Investigators and their colleagues analyzed samples not just from one randomly selected site in the mass, but from different anatomic areas such as epicenter, invading edge, and tumor-to-normal tissue transition.

Using a genomics based approach, STSI characterized gene-based mutational events common and unique to each anatomic locus in the colon cancer. To understand how a precise molecular characterization of events within a single tumor is influenced by the tumor’s heterogeneity, Levy and his colleagues developed a methodology that measured and established the relationship between changes in the exome in relation to tumor locus.

At the American Society of Human Genetics 2010 annual meeting, STSI reported that as much as 55% of the damaging point mutations that characterized the colon cancer differed among the distinct loci, and that seven to 20% of the point mutations at each of the loci were unique to either the epicenter, transition, luminal surface, deepest invasion and metastatic lymph areas. A total of 27% of all mutations detected in the tumor were common to all five loci. 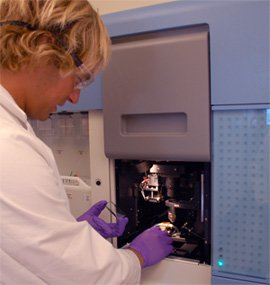