In multiple cancer data sets, the method identified particular positions in protein kinases that seemed to play a role in oncogenesis. It also enabled the researchers to compile a ranked list of candidate “driver” mutations. These “driver” mutations seemed to be very involved in nucleotide binding, possibly driven by resistance to inhibitors mimicking ATP, and regulatory functions, especially movements from the inactive to
active conformation. 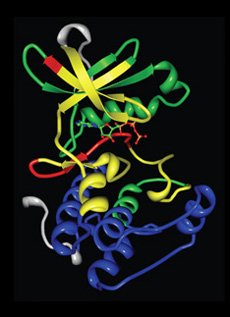