Eric Topol is a Professor of Genomics at the Scripps Research Institute, the Chief Academic Officer for Scripps Health, and the Director of the Scripps Translational Science Institute (STSI). Voted as the #1 Most Influential Physician Executive in the United States in a national poll conducted by Modern Healthcare, Dr. Topol works on genomic and wireless digital innovative technologies to reshape the future of medicine. He is a practicing cardiologist at Scripps in La Jolla, California and widely credited for leading the Cleveland Clinic to become the #1 center for heart care. While there he also started a new medical school, led many worldwide clinical trials to advance care for patients with heart disease, and spearheaded the discovery of multiple genes that increase susceptibility for heart attacks. Since 2006, in La Jolla, he leads the flagship NIH grant supported STSI. He has published 1100 peer-reviewed articles, over 165,000 citations, elected to the Institute of Medicine of the National Academy of Sciences, named in GQ Magazine as one of the Rock Stars of Science, and is one of the top 10 most cited researchers in medicine (Thomson Reuters, “Doctor of the Decade”). He is also Editor-in-Chief of Medscape. His bestseller book The Creative Destruction of Medicine (Basic Books) was published in 2012 and The Patient Will See You Now was published in January 2015.

In the quest to provide individualized medicine, knowing the biology of a person via genomics (and all the “omics” including proteomics, metabolomics, epigenomics, and “biomarkers”) is one essential step. The other goal is knowing about the individual’s physiology. This has become possible through the use of non-invasive wireless sensors that can continuously collect data on such metrics as blood pressure, heart rhythm and rate, oxygen saturation in the blood, blood glucose, and many more.

STSI is working closely with the West Wireless Health Institute, which is co-localized in the same geographical area, to provide a unique coupling of individualized definition --- of biology and physiology. We have been able to create a unique “digital medicine cluster” as our two institutes are working in tandem and synergistically to provide the biological and physiological “panoramic” view of each individual.

For example, if we know someone has a genomic risk for diabetes, we can use a continuous glucose sensor to hopefully prevent the condition from ever manifesting. New ways to screen breast cancer with wireless ultrasound imaging can potentially be used for women with high genomic susceptibility. By coupling genomics and wireless we are bringing two exceptionally powerful tools together to define each person at unprecedented levels with the ultimate goal of the prevention of disease and preservation of health. 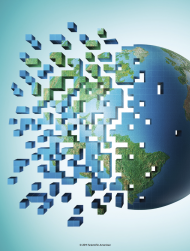 Eric Topol was quoted in a Scientific American article titled World Changing Ideas: “It’s technically possible to press a button [on your phone] and say, ‘I want to look at my vital signs in real time,’” says Eric Topol, director of the Scripps Trans­lational Science Institute.”

Wireless device for remote monitoring of all vital signs of hospitalized patients.