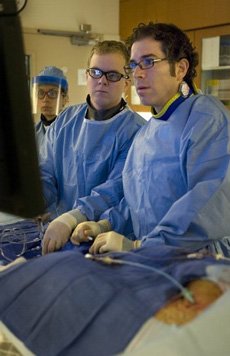 CYP2C19 testing represents an individualized approach to medical care that could prevent tens of thousands of adverse cardiovascular events in the over 30% of those with European ancestry and over 40% of those with Asian or African ancestry who have one of the four genetic variations, wrote Samir B. Damani, M.D., and Eric J. Topol, M.D., of STSI and Scripps Health, in a Journal of the American College of Cardiology essay.

The research team, headed by Matthew J. Price, M.D., Director of Interventional Cardiology at Scripps Clinic and Assistant Professor at STSI, found that doubling the dosage significantly reduced cardiac patients’ platelet reactivity, a measure of the blood cells’ “stickiness” or tendency to clump together to form the blood clots that can obstruct arteries and blood vessels.  The higher dosage of clopidogrel “normalized” reactivity in 56% of the 41 patients in the study.  The median duration of clopidogrel therapy was eight days.

Body mass index (BMI) was the only characteristic independently associated with a change in platelet reactivity with high-dose clopidogrel therapy. The researchers note that the patients’ BMI may have limited the effectiveness of doubling the dosage.  “…our findings question whether even an increased dosage can achieve adequate levels of platelet inhibition in obese patients” with high reactivity, they wrote in the journal report.