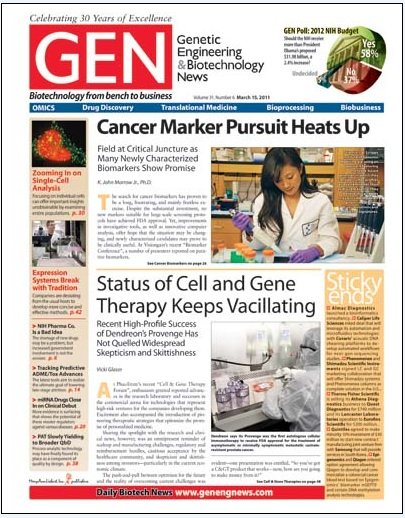 Ali Torkamani, Ph.D., of the Scripps Translational Science Institute, discussed recent studies on somatic mutations in cancer cells. He stressed that the analysis of the frequency of specific mutations among different tumors has identified a number of mutated genes that contribute to tumor initiation and progression. “Network-based analyses, in which we consider tumor profiles as a system rather than as discrete events, may provide increased power in detecting driver mutations and predictive signatures.”

Dr. Torkamani described this approach in cancer biomarker discovery, both for somatic mutation analysis and the identification of predictive signatures. The group’s protocol applies co-expression, gene ontology, literature, and interaction searches to various cancers. From these studies they derived modules indicating the functional relationships of the mutated genes making up the networks.

“Through this analysis, we identified Wnt/TGF-beta cross-talk, Wnt/VEGF signaling, and MAPK/focal adhesion kinase pathways as targets of rare driver mutations in breast cancer, colorectal cancer, and glioblastoma, respectively,” Dr. Torkamani asserted. “It is our belief that these mutations contribute to a refined shaping or ‘tuning’ of these pathways in such a way as to result in the inhibition of their tumor-suppressive signaling arms, and thereby, conserve or enhance tumor-promoting processes.”

Previous efforts to detect rare driver mutations have focused on known pathways or known direct interactions between mutated genes, resulting in descriptions of tumorigenic processes only in general terms, lacking specificity with respect to the role of these individual mutations in the tumorigenic process.

However, Dr. Torkamani stated that the network reconstruction and gene co-expression module-based approach was based on identifying a larger number of mutated genes than expected by chance. This unbiased approach does not rely on prior knowledge of the biological relationships between genes, but rather attempts to reconstruct sets of coordinately acting genes in order to define, de novo, biological processes affected by cancer mutations.

While Scripps’ approach to identifying cancer biomarkers does not offer immediate clinical applications, it does demonstrate how network-based approaches can be incorporated into a genomic medicine strategy directed toward the understanding of tumor development. These findings can serve a basis for new therapeutic and diagnostic tools.